Answering my email he suggests we should meet on the following day, at his studio. I will see his pictures and write about them.

It rains a little, is already dark, the street is desert and as soon as I park the car I identify his silhouette  talking on the phone, on the balcony of his double stories house, where, in the last floor, some of his secrets wait for me. He greets me at the door and invites me to come up. The serene tone of his voice, the clear and rhythmic speech, the interested and generous eyes, the fallen rain, the daylight which had vanished, the sum of those elements reaffirm the suspicion that we would not have a fast and pragmatic conversation.

As I already know a good part of his work I intuitively make the decision of not going in a first moment straight to the wall where dozens of copies and print tests are. I spend a few seconds there, still from a far distance, but enough to envision a general portrait of what is there waiting for me.

I turn my back on the photos and we sit at a table. For some inexplicable reason we start the conversation and what will occupy the next hour will be the apparently strange fact that I talk about my own work instead of listening about his (which, in the end, was my task!). While I talk about my creative process I perceive this inversion of the facts. I feel a little uncomfortable with it, I hesitate to continue my speech or to invert the game, but decide to go on, a bit suspicious. Further on I will realize that it was not in vain for me to be the protagonist of those first movements.

He listens attentively and, after a long time, making a connection with some of my particularities, comparing them to his own, there is a turning point in our conversation, determining a change of places, and with it comes the wall and its photographs. We decide to approach them and it is now my turn to be silent, observing with calm what is unraveled before my eyes. I dedicate a few minutes examining the sequences, the detail, the variations and I realize I would be unable to make a description of his work through a thematic or narrative perspective.

I tell him about this perception of mine and start to feel my body moving slightly back and forth, unwillingly, in  an unconscious attempt to establish a point of view, a focus, a definition trying to capture a vibration which escapes me, but in which it is possible to connect and feel.

In this instant he warns me that the series is called, for now, “Suicide”. This new information automatically holds my attention. From that on I begin to have more conscience of some of the relations which are established. We speak of the glare present in almost all images, the bright light which invades the framing, reinforcing the idea of a prolongation outside the picture, in all directions. I give up trying to capture a story or concrete fact. I start a relation with the images through a sensorial point of view.

I identify the representation of moments of intense ambivalence, an energetic threshold between opposite situations, an eternal tightrope which permeates nearly all images, a species of interval between acts, the illusion of fluid moments which escape of full apprehension in daily life, despite we are able to feel them flesh and bone. It is the paradox of the moment, when still asleep we realize we are awakening, or if still awake, that we are beginning a process of dreaming. We are here and there, in both places, or nowhere. It is the sensation a suicidal person must experiment, still living but about to die or, at the limit, in an irreversible death process, but still alive (while throwing himself oh a building’s window).

I return to the wall and now a see the work as a continuous landscape, a compilation, a series, a cadence of images which obsessively reach the core of this feeling of ambivalence, of something which is not yet fixed, but is already created, has already started. It is the photographic paper in a dark room, still white, suffering in part the first effects of the chemical revealer, the fetus in development, the contingence of reflected decisions, but not yet taken – and also not abandoned.

I feel an urge to tease and ask him if underneath that aesthetics he is not in reality trying to hide from me things and facts that I would like to have more direct access at work, but coincidently he mentions an interview of Dutch photographer Machiel Botman, where he would have said that the facts of his life would not be so interesting. I doubt if it is a good justification, but in theory I do not disagree.  Therefore, I leave this friendly teasing to be reflected with this text. He also shows me pictures from Daido Moriyama and study drawings from Rodin.

A work of art requires the participation of the spectator in the sense of trying to find a kind of completeness. Daniel’s pictures, to some extent, at least for me, invite to a step beyond making automatic connections with my own life, they invite me for the challenge of being co-author in a more strict sense, of diving into reveries and seeying myself in the position of establishing a creation act, of challenging me to understand their universe and, for example, writing this text, taking risks just like he takes with his work – poetic, open, sometimes impressionist, other times expressionist, sensorial.

Now it is no longer strange the feeling I had as I ran over, in that first moment, the main objective of the night, when I resolved to talk about my process first. From the beginning the rules where already set, we would be partners on that evening, artist and spectator, both protagonists of a moment of knowledge and estrangement, of meeting, or maybe a near-meeting, like his visceral and intense images, near-images. 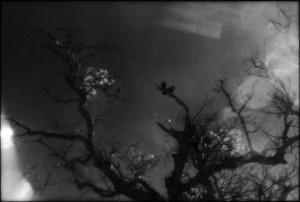